Generating networks from polylines with ArcGIS

I’ve been with DWR for almost a year and half now, and I continue to be involved with analyses for the Delta Smelt Resiliency Strategy. In particular, I’ve continued to do modeling and statistical analysis of water quality data to quantify the effects of operating the salinity control gates on delta smelt habitat in Suisun Marsh. One thing I’ve been playing with lately is looking at alternative metrics of quantifying the habitat benefit of operating the gates, with a particular focus on assessing changes in habitat extent, rather than simply area, and how this might play into questions regarding smelt population resiliency. My analysis is pretty half-baked right now, but I’m honing in on analyses that consider linear measures of habitat along stream networks.

I’m working with a geographic stream network (the National Hydrography Dataset) to map out Delta smelt habitat, which comes in the form of a collection of polylines. What I really want, though, is a network—a data structure I can use to ask questions about habitat contiguity. I also am working with water quality rasters generated by a computer model, and I need some way to associate this data with the stream network. ArcGIS has a framework for network layers, but it seems pretty specific to transportation applications and not general network analysis or representation.

In the end, I came up with my own process for converting a polyline layer into the components of a network—namely, the node and edge lists. It gets a bit fiddly, but hopefully I’ve broken the process down into something digestable.

Depending on the application, we may need to capture the polyline geometry and spatial variation more explicitly in the structure of the resulting network object. In my case, conditions changed significantly along the length of any given polyline, so I needed many points per line in order to adequately represent the spatial variation in conditions. I also wanted to keep the geometry of my polylines intact, so I needed multiple points along the line in order to capture the coordinates and curvature of the lines. I accomplished this by densifying my polylines using the ArcGIS Densify tool.

Capturing network nodes from the polylines

A network is defined as collection of “nodes” connected by “edges”. Logically, the polylines will correspond to edges in the resulting network and the nodes are the junctions between polylines, i.e. the polyline vertices. We need to extract the polyline vertices as a point layer in order to generate the node list needed to construct the network. We can generate this “nodes” layer from the polyline layer with the ArcGIS Feature Vertices To Points tool. We want each vertex of every line to be captured only once in the output, so specify the argument point_location = "ALL". In addition to generating an OBJECTID for each vertex, the resulting layer will also have a “ORIG_FID” layer that captures the ID of the original line segment.

Unfortunately, converting a polyline layer where individual polylines connect will produce duplicate vertices at those junctions, because a point will be created for each line at each junction. At the same time, some vertices might not be created at all because some lines might terminate at a junction while others actually pass through the junction (depending on how the polylines were created in the first place). The easiest way to handle the second issue is to first dissolve our polyline layer into a single feature using the ArcGIS Dissolve tool, and use Feature Vertices To Points on the dissolved layer to get a list of vertices. This will also remove duplicate points where one segment ends and the next begins, but it will still result in a duplicate points at junctions where more than two lines connect. We can remove these duplicate points using the ArcGIS DeleteIdentical tool and specifying the argument field = "Shape" to delete duplicates based on their location.

Note that removing duplicate in this way will leave gaps in the OBJECTID of the vertices layer. If you know that your graph creation software assumes that network nodes have sequential IDs, you can fix the issue simply by making a copy of the layer with the ArcGIS CopyFeatures tool.

Capturing network edges from the polylines

Most programs that construct networks can accept an “edge list” that defines connections between nodes. Typically, the edge list is a two-column table with the “from” nodes listed in the first column and the “to” nodes listed in the second column. We have the polylines themselves, but we need to do some legwork in order to generate the list of “from” and “to” nodes that define each polyline.

Things get a little fiddly if we needed to do the prep work of densifying and dissolving our polylines, because we likely want to capture the “from” and “to” nodes of each segment of the line, not just the start and end of the whole line. We therefore need to create a layer of polyline segments, where each segment corresponds to a node in the network. We can use the ArcGIS Split Line At Vertices tool to convert long polylines into many short segments. We need to use the dissolved polyline layer here, for the same reason we did for the vertices: we need to ensure that segments end at junctions, rather than passing through them.

Now that we have the segments defined, we can capture the “from” and “to” node lists through some repetitive use of the ArcGIS Feature Vertices To Points tool. We have to run the tool twice on the segments layer: the first time we specify  the argument point_location = "START" to capture the “from” nodes of each line, and the second time we specify point_location = "END" to capture the “to” nodes of each line. In both cases, the resulting layer will have the field “ORIG_FID” that identifies the ID of the original line segment.

Although we are able to identify the start and end vertices using the Feature Vertices To Points tool, the object IDs are not consistent between the two layers. Since the “to” vertex of one segment is also the “from” vertex of the next segment, we need to use consistent IDs for the vertices in the “from” and “to” point layers. There are a few ways to accomplish this, but one easy way is to use the ArcGIS Identity tool. Run this tool for each of the “from” and “to” point layers, specifying the “nodes” layer from step one as the identity_feature argument. We really only need to the OBJECTID of the points in the “node” layer, so we can specify the argument join_attributes = "ONLY_FID".

We now have a node list and edge list that together define the structure of the network. If the geometric structure is all we need, we can jump straight to our program of choice (e.g. R, Python, etc.) to construct the network from the edge list. However, it’s likely that we want to capture other information to define properties of the network nodes and edges.

For example, perhaps we have a raster that underlies our polyline network, and we want to capture the raster value underlying each node in our network. We can use the ArcGIS Extract Vaues to Points tool to add the underlying raster values as an attribute to each point in the “node” layer we generated earlier. If we want to extract values from multiple rasters, we can use the Extract Multi Values to Points tool instead. One issue to keep in mind is that using Extract Vaues to Points may reorder your OBJECTIDs, so do this step before you start constructing the edge list or create a copy of the OBJECTID field first, so that you don’t lose the original feature ordering (alternatively, just use Extract Multi Values to Points even when you’re only using one raster, because it will add the raster attributes without reordering your OBJECTIDs). If we want our network to have a spatial reference, we can also attach the coordinates of the vertices with the ArcGIS Add XY Coordinates tool.

Edge weights are only slightly trickier, and it really depends on what we want to capture. The “edge list” layer we created earlier likely already has some attributes, e.g. the length of each segment. We can attach other line information too, such as the line bearing. However, if we want to get information that isn’t directly calculable from the line—for example, the average raster value under the line—we need to do some more legwork. One option is to assign the average of the edge’s start and end node attributes to the edge after constructing the network. If we need to some GIS analysis to determine the edge attributes, one option is to generate the midpoints of each line segment via the Feature Vertices To Points tool with the argument point_location = "MID", do whatever analysis we need on those midpoints (e.g. extract the values from a raster via the Extract Vaues to Points tool), and then join those fields back to the “edge” layer using the Join Field tool. If we need to re-associate attributes that were originally associated with the polylines but were lost when the polyline layer was dissolved, we can add those back in using the Identity tool.

Once we have the “node” and “edge” layers, it’s (probably) straightforward to construct the network in the program of our choice. The exact way to do this obviously depends on what program you’re using; in R, we can construct a network using the igraph package function graph_from_data_frame(), which takes an edge list and node list (as dataframes, with additional columns interpreted as edge/node attributes) as inputs. The advantage of using R is that we can also use the sf package to read the attribute tables of the spatial layers directly using the sf_read() function, i.e. we don’t need to export the attribute tables of the “node” and “edge” layers to a text file first.

I converted these steps into an R script that uses my arcpy package for R:

Now that the node and edge lists have been constructed, it’s trivial to build a network object: 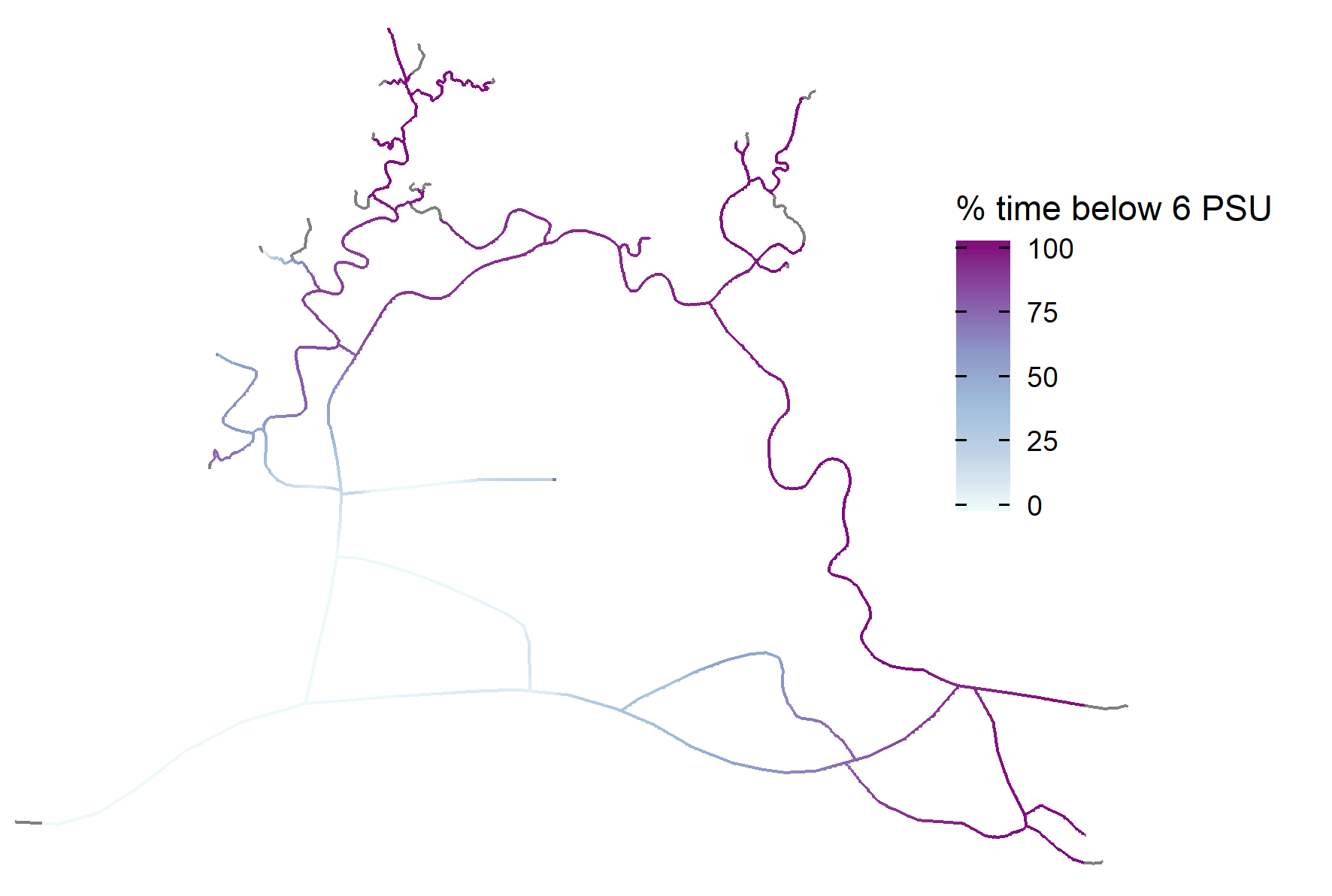 That’s a surprising amount of code for something that conceptually is quite simple. However, it wouldn’t be hard to generalize the above process into a function. For me, the payoff is worth it—now that I have a network object, I can use graph theory to do some interesting analyses.